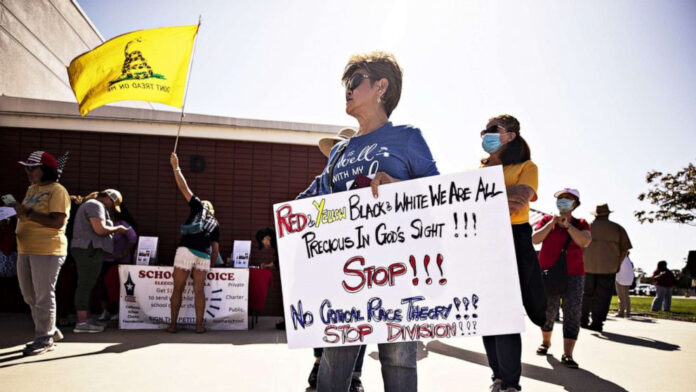 The Democrats swear up and down that they’re acting out of what America wants when it comes to teaching Critical Race Theory (CRT). Yet, in so many states, parents are rising up to say that they don’t want CRT anywhere near their children’s classrooms.

Texas governor Greg Abbott is the latest to prohibit schools from teaching Critical Race Theory. He goes one further by wording the language of the law to prohibit curriculum where “an individual should feel discomfort, guilt, anguish, or any other form of psychological distress on account of the individual’s race or sex.”

In Texas House Bill 3979, they have been cautious not to specifically mention Critical Race Theory. Instead, they’re prohibiting the teaching that CRT is based on, including holding the idea that America is fundamentally racist.

None of what CRT teaches makes any sense. The liberals want everyone to acknowledge that America is fundamentally racist. However, in order to address that, they want everyone to view social interactions and people based on their race. They want to create a concept of “antiracism” where it’s not enough to not be racist. Instead, they want everyone to become social justice warriors and adopt race-based policies.

We’re supposed to be focused on unity. In the classrooms, we should be teaching people the history of the United States and identifying that there were racial and racist elements. However, we should not be trying to erase history. We most certainly shouldn’t be making students feel guilty or ashamed for their race.

There’s a point where we have to draw the line in order to protect students psychologically and socially. No one asked to be of a particular race. And, in today’s society, so many students have colorful backgrounds.

The time for reparations has long passed. The U.S. is a melting pot of cultures. We must ignore skin color and move on. No one today was a slave owner, so it’s time that we stop making white people feel guilty. There is no need for apologies or for “whitewashing.”

The new legislation in Texas will go into effect on September 1. It is specific with what historical texts can and cannot be taught. For example, students can be taught about the “I Have a Dream” speech from Martin Luther King, Jr but they cannot be taught about the 1619 Project. Further, the law will require teaching about the history of white supremacy, which includes discussing slavery, the Ku Klux Klan, and how such behaviors and thoughts are “morally wrong.”

Texas isn’t the only one to protect the education and psychological state of students with new legislation. Arkansas, Florida, Idaho, and Oklahoma have already passed such laws. Many other states are debating whether to pass a ban on CRT and other divisive concepts in the classroom. These states include Ohio, Arizona, Kentucky, Utah, and New Hampshire.

Many Democratic states are talking about it, too. It seems that no one wants these divisive concepts anywhere near the classroom. The only school districts that are allowing such lessons are the ones that are ultra-liberal.

Teaching about race and what is and isn’t morally sound is one thing. Teaching students to judge people based on their race and make the necessary racial adjustments is something completely different – and it’s one of the most divisive things that could happen in the United States.

If the liberals would only listen to their constituents, they would know that not only is the country not systemically racist but that no one wants Critical Race Theory in the classrooms (or in boardrooms or anywhere else).