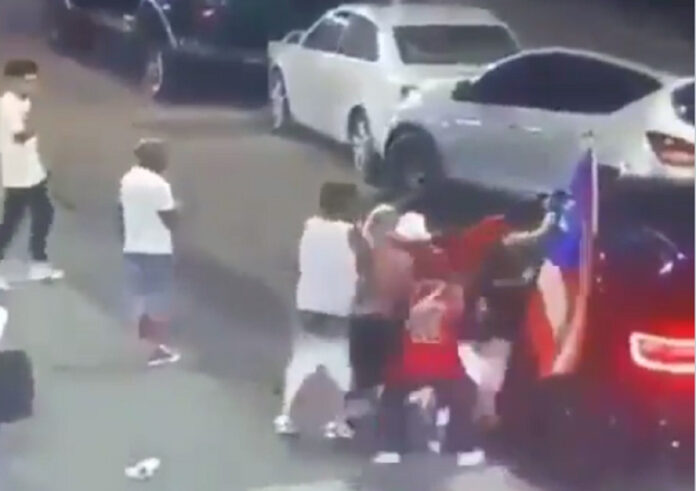 A tragic shooting took place on Saturday night in Humboldt Park. The mainstream media, which is normally quick to highlight crimes of this nature, is suddenly silent. We thought that there were supposed to be no more hate crimes. Instead, all we have heard are crickets!

It’s funny how that works, isn’t it? The shooting took place as people were departing from Chicago’s 43rd Annual Puerto Rican People’s Day Parade. This is a widely attended parade, as people travel from all over the country to spend time with friends, loved ones and like-minded individuals.

A mob of black men approached a vehicle that had a large Puerto Rican flag waving and it did not take long before things got ugly. The victims were pulled out of the vehicle and shot. According to the police, the couple that was inside of the vehicle was ambushed by at least three males.

According to reports from ABC 7, “the man was rushed to Saints Mary and Elizabeth Medical Center, where he was pronounced dead, police said. He has not been identified. The woman was struck in the neck and rushed to Stroger Hospital in critical condition, police said.” There are videos of the attack but we are going to warn you before you decide to watch any of them. They are very graphic in nature.

“This is a racist attack. This is what MSM will never talk about because it doesn’t fit their narrative. Puerto Rican’s (see flag) pulled out of their vehicle and shot by Black attackers. Latino -vs- Black is a common cultural conflict,” TheLastRefuge2 tweeted. These are our thoughts exactly. Where is the mainstream media to examine the cause of this conflict?

This is a racist attack. This is what MSM will never talk about because it doesn’t fit their narrative.

Puerto Rican’s (see flag) pulled out of their vehicle and shot by Black attackers.

Latino -vs- Black is a common cultural conflict. https://t.co/UNsYFk6ikC

We already know the answer to that one. There is nothing here that can be blamed on Trump. They got so used to that song and dance for the past few years, they do not know what to do with themselves anymore. At this time, no arrests have been announced and no one seems all that concerned about the madness that is taking place right in front of their very eyes.

Humboldt Park #Chicago last night. A Latino couple displaying a Puerto Rican flag on their car was pulled out of their car and shot.
At least 21 people were shot in #Chicago overnight so far and the weekend is not over. @chicagosmayor @LoriLightfoot shame on you! pic.twitter.com/uvtlGhZKHo

When it came time to talk about hate crimes against Asian-Americans, we know exactly why the mainstream media was so anxious to start flapping their gums. They did not care about the hate crimes at all, they cared about what they represented. It was the perfect chance to start pushing the Trump snowball down the hill again.

They were unable to use him as the scapegoat for the past few months because now they are stuck with Biden. We already know that the mainstream media loves swinging at the Trump pinata any chance that they get. Unfortunately, you can only bash the pinata so many times and still expect a river of candy to come flying out.

People have gotten sick of it and they are not buying in anymore. If hate crimes are bad when we can blame Trump fro them, they are bad all of the time. Instead, the media turns a blind eye to what is happening unless they are able to spin it into something that makes the former president look bad.

That’s how obsessive they have become. We knew that all of the “resistance” goofballs would struggle to get back to reality once they no longer had a common enemy. However, we did not expect them to go out like this. This is truly despicable behavior.

Even if the mainstream media does not care about these victims, we are going to try our best to stand with them during these trying times. Anyone who is tried of the constant Trump blaming is sure to relate to this. Unfortunately for these victims, this is one that they cannot blame on him and so, you will hear nary a word of it on the news. We wish that we could say we were surprised.