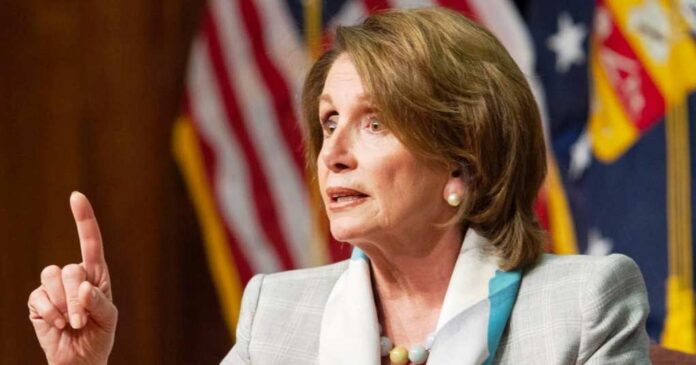 Nancy Pelosi is a Democrat that is entirely drunk with power. She sits in her chair of authority, believing that she is the final authority in Washington. She makes statements that she persists are factual but are nothing more than her opinions. And when asked questions by reporters, she likes to think she has all of the answers. But when it comes to abortion, she does not have a clue as to what she is talking about.

The Democrats send out mixed messages about what constitutes abortion. Some believe that a baby is not a baby until a certain amount of time has passed by. So they believe that a mother can abort whatever is growing inside of her.

And then there are the others that believe a baby is not a baby as long as its head has not been exposed to air. So, they feel that it is entirely justifiable to murder the small child before air can reach the baby’s lungs. No matter a Democrat may define life, abortion will always be the murder of an unborn baby.

A reporter asked Nancy Pelosi a question regarding life and unborn babies. It was the moment when all noise comes an end and silence feels the air. Pelosi was put on the spot, and now everyone expected a response. But all they would get would be a deflection. A move that is typical of a Democrat who does not want to answer a question that might pin them down.

Pelosi fully supports the Supreme Court decision made in 1973 that essentially paved the way for what the country struggles with today. 1973 marked the year that the millions would murder babies by liberals that have no value of life.

Pelosi is a woman that believes it is her right to kill a baby if it is something that she would not want or it would cause hardship. The sad old woman was asked by a conservative reporter, “The Supreme Court this fall will review a Mississippi law that bans most abortions after 15 weeks of pregnancy. Is an unborn baby at 15 weeks a human being?”

Pelosi did not even attempt to answer the question. She wanted so much to avoid giving an answer that would have to incriminate her or brought some form of criticism. She believes that a woman has the right to choose. No one has the right to choose death for another human being. But for some reason, she thinks that she can play God and give that choice to people.

She stated that “Let me just say that I’m a big supporter of Roe v Wade. I’m a mother of five children in six years. I think I have some standing on this issue as to respecting a woman’s right to choose.”

The court case she holds onto to soothe her conscience of murder was a liberal’s playground. The woman who supposedly drove the issue wanted to back out because she believed that life begins at conception. But her nasty lawyers pushed the issue and went to court and won. There is no scientific basis for murdering a baby. All that exists is selfishness and a will that does not want to own up to being a parent.

Pelosi claims to be a Catholic. And her church is very much against killing babies. But she sees no issues with defying her religious leaders and supporting murder.

She believes that politicians should dictate when life begins and what women can do with their bodies. She said in 2015 that “…politicians should determine what affects the health of a woman, her life, her health, and the rest. I don’t think it’s up to politicians to do that, and that’s why we are very overwhelmingly opposing what is going on the floor of the House.”

And she also thinks that by being a mother, she has more knowledge of life than any other person. Every single abortion that has taken place is the murder of a human being, and nothing will ever change that fact.