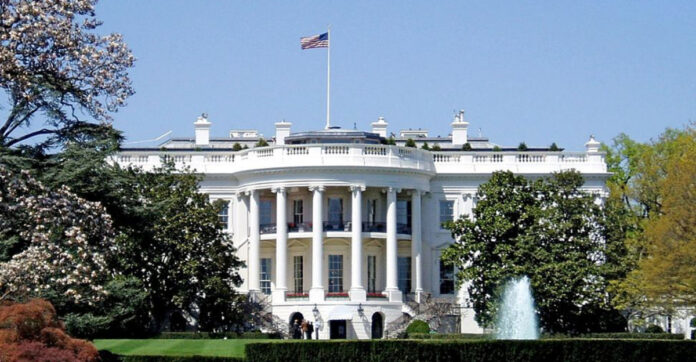 For a long time, the former President Trump fought with the devious liberals to secure the southern border. At times some of them would travel south and take pitiful pictures of themselves hugging the detention center fences and acting as they cared.

The worst of the bunch was Alexandria Ocasio-Cortez. Her Barbie doll appearance at the border was pathetic and had no bearing at all in her so-called fight to liberate the illegals.

But Donald Trump’s wall is not the only wall in existence in America. Joe Biden has followed suit and build his own version of the border wall right in the middle of Washington D.C.

The southern border wall has a purpose. It is to secure the border and keep drugs and illegals out of the United States. The border agents that patrol the border work hard at security and even help those who would cross the dividing line.

But Biden’s wall has no purpose. He had it erected to keep Americans out of the Capitol Building during his inauguration. But now that the event is over, there is no need to keep it in place.

Biden has even kept a small number of troops at his wall to prevent any legal citizens from entering his illegal office. He has created a version of his basement at the Oval Office. As long as Biden does not leave his cage, no one can get to him.

The sad part about his ordeal is that the Acting Capitol Police Chief is demanding that permanent barriers be put in place to keep people away. Instead of securing the southern border and protecting Americans, Biden is securing himself from Americans.

And that is not the only wall that the liberals are erecting across the country. In Hawaii, the state has erected there a tall chain-link fence around one of their monuments. The liberals are fearful and only care about themselves. They want to protect their heritage and liberal monuments.

The liberal run FBI sent out a memo that violence “could” erupt all over the country. Their thoughts were that the Republicans were going to start a civil war. But they were only thinking of themselves. Not one riot broke out on the day they thought it was going to happen.

Biden’s new wall is laughable hypocrisy. It defines where his loyalties are placed. Instead, he would hold hands with other nations that hate America and let people in the country that are not legal citizens. He has no reason to trust American blood with his life.

In some way, he must think that he lives among enemies. Patriots called Republicans to hold his wacky thoughts in check as his mind slowly slips away.

The White House looks like a border crossing in the Middle East. Armed guards are patrolling the grounds and pointing their guns at people that get too close. Biden’s wall is being called the “ha-ha” walls. They are a laughable attempt to act like a hurt puppy trying to hide from a threat that never existed.

The Democrats have not said one thing about Biden’s wall or the cost of having the troops remain. They are content to sit on their liberal hands and let the crazy man turn the national heritage into a picture of a demented mind.

Biden’s wall looks excellent to the socialist Democrats. They are happy to keep Americans from their own Capitol Building. They have set up the area to look like an Iranian bunker depot where their leaders run and hide when an American drone flies by.

Biden, of course, stopped the construction of the wall at the southern border. He just could not let those working to secure the border finish out their contract. His executive order cost the country billions of dollars and thousands of jobs.

His relentless attacks on the policies of Donald Trump is the only thing he knows. Everything about his job remains in the dark. His primary mission is to remove any trace of Donald Trump before his time in office expires. And should that time happen before his term is up, the nation will have to stomach the viral infection of Kamala Harris.