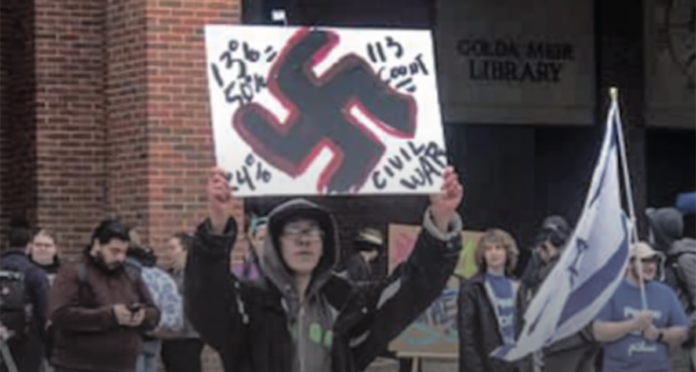 A report from the “Washington Free Beacon” said that antisemitism on college campuses has been growing like a wildfire since at least 2017. The fact that many campuses are closed due to the coronavirus pandemic makes no difference. Those students affected by the closures have merely transferred their rantings to the pages of social media and elsewhere.

A student who regularly performs around his campus held an online singalong where students were invited to sing anti-semitic songs with him. On another campus, a Jewish professor found a swastika spraypainted on his office door.

Alums for Campus Fairness, a college campus advocacy group, issued a report which stated the following: “Although campuses closed when coronavirus erupted, and nearly half of colleges began their fall semesters entirely or primarily online, antisemitism has continued both online and offline.”

San Francisco State University was recently slapped with a civil rights lawsuit for what was referred to as “institutionalized anti-Semitism.” And in 2020, an investigation was launched by the Department of Education concerning the University of Illinois where a plethora of anti-semitic incidents have been reported.

According to a study conducted by the American Jewish Committee in 2019, over 80 percent of American Jews believe that anti-Semitism has dramatically increased over the past four to five years. They said they have witnessed it first-hand in their everyday lives and that it has not been restricted to college and university campuses.

It’s America as a whole.

The executive director of Alums for Campus Fairness, Avi Gordan, said, “Anti-Semitic incidents on campuses across the U.S. are on the rise at alarming rates, creating a toxic environment for Jewish students.” Gordon is asking alumni communities to lend a helping hand in fighting the rise in hatred. Residing within such communities are those who have straight lines of input to campus leaders and faculty.

A significant cause of recent campus disturbances can be attributed to anti-Israel student activists taking the side of Students for Justice in Palestine. Some campuses have banned SJP for harassing Jewish students and bullying pro-Israeli speakers. The group is also famous for inviting extremists to campuses for the sole purpose of creating havoc.

In March 2019 the University of North Carolina in conjunction with Duke University invited Tomer Nafar to speak at an anti-Israel conference. In an in-your-face move, Nafar asked the attendees to help him sing an anti-semitism song. “I cannot be anti-Semitic alone,” he said.

Just last year at the University of Wisconsin, Jewish campus buildings were spraypainted with anti-Israel graffiti, including the words “Free Palestine.” Also in 2020, the student president at Pomona College took to the pages of Instagram where he posted his doubts about the Holocaust and a multitude of other steaming anti-Semitic remarks.

Alums for Campus Fairness noticed a disturbing ongoing and escalating trend in the form of anti-Zionism. Anti-Israel activists see this as a “socially acceptable view masquerading as a commitment to social justice.” Their report said, “An indictment of Israel frequently expands to encompass all Jews, and its thin veneer often barely disguises bald antisemitism.”

It also went on to say that college faculty members and administrators are not the problems. The issue lies within the student bodies who are pushing Anti-Semitic viewpoints on campuses. The report did say that “antisemitic professors and departments do still exist,” but most of the reported incidences, although occurring at university-sponsored events, had nothing to do with the school’s staff.

The group is asking other alumni organizations to write letters, sign petitions, and meet with their respective colleges to attempt stunting the growth of the festering anti-Semitism.

Outside of compiling reports not much action has been taken by the group or other activists who share their concerns, but they claim their presence on campuses will soon be a prevalent and very vocal occurrence.