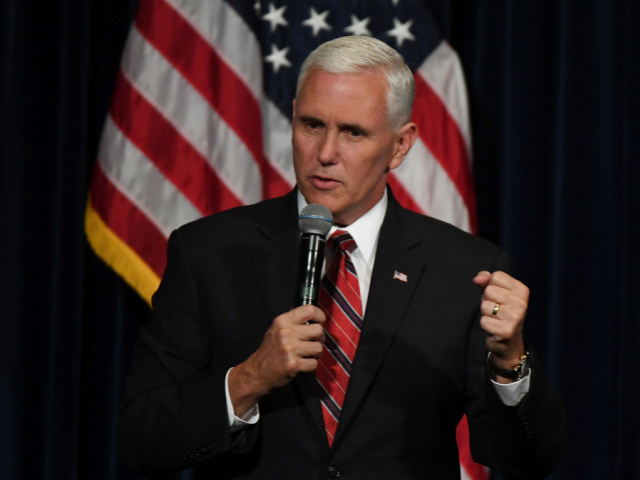 Speaking to an audience during a visit to the Reagan Library in Southern California as part of “The Time For Choosing” series, Pence warned that it is not enough to stand as the opposition to the radical left’s agenda. Conservatives, he said, must offer an alternative — a positive agenda rooted in the growth that the MAGA agenda brought forth over the past four years.

“President Trump taught us what Republicans can accomplish when leaders stand firm on conservative principles and don’t back down,” he said, touting the accomplishments made throughout the Trump-Pence administration. Such accomplishments included becoming a net exporter of energy for the first time in 70 years, holding China accountable, and launching the most sweeping national mobilization since WWII in response to the Chinese coronavirus pandemic.

Though they lost the election, Pence said they garnered millions more votes, added 15 seats in the House of Representatives, and won the highest proportion of African American and Hispanic votes in 60 years.

Today’s Democrat Party, he said, has an agenda that is “so radical that it is taking us beyond just the designs of liberalism” to an agenda of national decline.

Pence said Republicans must stand as a loyal opposition but further the movement of the past four years while incorporating pillars that “expanded” the reach and appeal of the GOP. Those pillars include a strong national defense, free market, traditional values, and preserving the right to life.

“On these, we will not waiver. There will be no compromise,” he said, listing the “new pillars” that former President Trump ushered in during his presidency. Those included border security, free and fair trade, a patriotic education, and a tough approach to China.

Invoking the former president, Pence highlighted Trump’s warning that a nation without borders is not a nation and knocked the Biden administration for unleashing what he described as the “worst crisis in history on our southern border.”

Conservatives, Pence said, must demand the completion of the border wall, an end to asylum fraud, and a restoration of all the policies that ended illegal immigration on the southern border of the U.S. They also must support merit-based immigration.
Pence used China as an example in his pitch for free and fair trade, noting that they “pretended to be a fair and equal trading partner with the world, all the while stealing our intellectual property, illegally subsidizing state-sponsored industries, and flooding our markets with cheap, substandard products to destroy American businesses.”

Meanwhile, our manufacturing base was hollowed out; many of our citizens were impoverished; the American working class was gutted; billions, possibly even trillions of dollars’ worth of technology, innovation, and productivity were stolen; and … some of our most critical supply chains were off-shored, with ominous consequences for economic security and the well-being of our people.

The Trump-Pence administration was the first to recognize that truth, he explained:

Going forward our party and our nation must continue to recognize that the greatest threat we face to our economy and more, is the Chinese Communist Party. We must continue to stand up to China to defend our prosperity, security, and values and the Republican Party must lead the way.

Pence pointed to the fourth America Agenda item, which is prioritizing a patriotic education, which he said is “essential to the survival of liberty.”

“As a Party, we must expose the myths the radical left has used to corrupt the minds of America’s youth, repealing the policies built upon those myths,” he said.

The former Vice President called to end the Defund the Police movement, take a stand against Cancel Culture, and continue to oppose the left’s efforts to:

…rewrite American history through initiatives like the 1619 Project, and in the spirit of our administration’s 1776 Commission, the Republican Party in the years ahead must make school choice the right of every American … and eliminate Critical Race Theory at every level.

Critical Race Theory teaches children as young as kindergarten to be ashamed of their skin color. It represents a full-throated assault aimed at the heart of the American Experiment, and it’s nothing more than state-sponsored and state-sanctioned racism.

“Our Party must ensure that Critical Race Theory is expelled from our schools, our military, and our public institutions,” he said to applause.

Pence added that the GOP must recognize that the Republican Party has become the “last line of defense for our Constitution and our American heritage of freedom.” He went on to say:

We live in a time when the leaders in the Democratic Party routinely demean the American founding; Today, Democrats seek to rewrite our Constitution, our Second Amendment, to redefine the liberties enshrined in our Bill of Rights through their efforts to pack the Supreme Court and advance their radical agenda.

“As we forge an American Agenda for the future of our party, we must make it clear that the Republican Party will always defend the principles at the heart of our Republic,” he continued, warning, “If we don’t, no one else will.” Pence added:

In the years ahead, the American people must know that our Republican Party will always keep our oath to the Constitution; even when it would be politically expedient to do otherwise. That we are the party that, as the Bible says, will keep our oath, even when it hurts.

Pence then addressed his role as vice president on the “dark day” of January 6, noting how proud he was to have played a small part on that “tragic day when we reconvened the Congress and fulfilled our duty under the Constitution and the laws of the United States.”

he said, emphasizing the country needs the Republican Party “to be the party of the Constitution of the United States”:

Now I understand the disappointment many feel about the last election. I can relate. I was on the ballot. But there’s more at stake than our party and our political fortunes. If we lose faith in the Constitution, we won’t just lose elections–we’ll lose our country.