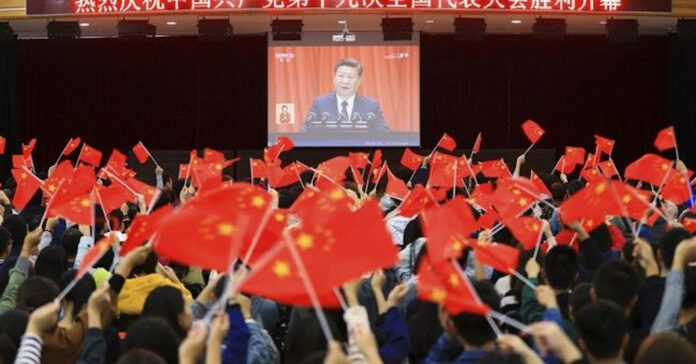 China is invading the Americas.

For 200 years the Monroe Doctrine — staked out by U.S. President James Monroe in December 1823 — ruled the world’s Western Hemisphere on the principle of American hegemony.

American dominance didn’t stop enemies, adversaries, and aspiring powers such as the Soviet Union, Fidel Castro, and Che Guevara, Hugo Chavez, and others from trying to thwart American leadership.

Now the Chinese communists are trying to build footholds and enemy states in Latin America.

As America sealed its Revolution victory, ratified a government, and turned to the world, America’s leaders recognized that to maintain America’s freedom and liberties, while hewing to a generally applied policy of isolationism, America had to fight for and preserve freedom and liberty abroad.

President James Monroe announced the policy declaring United States’ primacy in the Western Hemisphere during his 1823 State of the Union address to Congress.

At the time, the Monroe Doctrine was directed at European powers such as Spain and the United Kingdom. The United States wanted to be clear on their position: the U.S. government would there forward not permit colonization or puppet monarchs in the Western Hemisphere.

In North America, the Chinese Communist Party assault is more silent with China’s use of corporate, political, academic, and military espionage; sanctions and tariffs on private businesses; exportation of deadly drugs such as fentanyl to the U.S., which kills hundreds of thousands of Americans; and media propaganda.

Meanwhile, in South America, the Chinese communists are using the pandemic as an opportunity to buy up Latin America and install communist spies and loyalist governments that are against the United States.

“The cell phone I’m [speaking on] now is from China,” said a citizen from the South American country of Paraguay who lives in Caaguazú, a town some 100 miles east of the Paraguay capital, Asunción. “The shoes and clothes that I buy and wear, it all comes from China. So why can’t we export food to China?”

Many in Latin America are frustrated that China is buying up their country, taking over jobs, gutting local economies, and enslaving them into debt.

Of course, this is the Faustian bargain a country makes when signing a deal – a.k.a. a death pact – with China, such as many African countries have with national infrastructure projects, along with the attendant radioactive effects of China’s dystopian style of government on your society.

Among the Chinese Communist Party’s top targets is Latin America.

In the past five years, the Dominican Republic, El Salvador, Paraguay, and Panama have each switched their recognition from Taiwan to China.

China crippled the world with a deadly virus and is now using the pandemic to infiltrate, buy up and take over countries.

As of November 2020, China had provided 150 countries around the world with over 179 billion masks, 1.73 billion protective suits, and 543 million testing kits.

Much of this personal protective equipment (PPE) was faulty and hazardous, but that has never stopped China from touting a propaganda victory. China is the same country that thinks killing 30 million of its citizens is a righteous act.

China is now using the pandemic to win influence in Latin America.

Through China’s foreign relations the Chinese communists are playing the international influence game in gaining votes in the United Nations and garnering support for Chinese appointees to multinational organizations.

For those more focused on the real military implications of China’s Latin American creep, China will now be able to establish a telecommunications foothold in the region.

In 2019, Chinese companies invested $12.8 billion in Latin America, up 16.5% from the previous year, with a heavy emphasis on investment in regional infrastructures such as roads, ports, dams, and railways. Today, China is South America’s top trading partner.

Chinese purchases of minerals and agricultural commodities helped South America stave off the worst privations of the 2008 financial crisis.

And during COVID-19, Latin America is once again reliant on China, whose middle class drives demand for beef from Uruguay, copper from Chile, oil from Colombia, and soya from Brazil.

There are proposals for building a transcontinental railway linking South America’s Pacific and Atlantic coasts from Chile to Brazil. Whether or not countries like Peru become in hock to the Chinese government after they partner to build a port, this has an influence on local economies and the facts on the ground regarding South American countries and their relationship with their traditional benefactor, the United States of America.