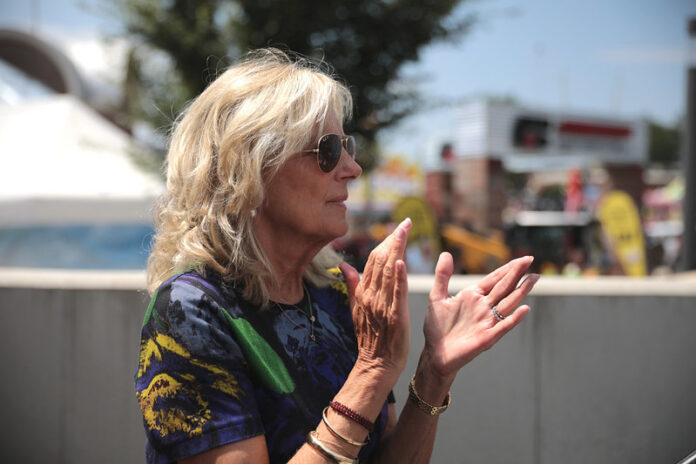 Dr. Jill Biden has been traveling around the country, doing what her husband should be doing. She’s shaking hands and kissing babies. The problem is that President Biden can’t do it – so she’s stepping in to do what he cannot.

And it’s not that President Biden won’t…he can’t. Who knows what he would say to people without having a teleprompter in front of him at all times? It would be a press nightmare for the administration.

The First Lady has been promoting the vaccine. When she went to Nashville, Tennessee, she had country singer Brad Paisley with her.

She’s not one of the most likable first ladies in history. And her poking fun at Tennesseans for not being vaccinated isn’t going to help her case at all.

When she got to the podium, she let out a nervous laugh when she said, “This state still has mmm, a little bit of a way to go.” She went on to point out that only three out of 10 in the state have been vaccinated against COVID-19.

The audience, all supposedly backing Biden, booed in response to what she had to say.

No one wants to hear her criticism.

There are reasons why so many people are holding out on the vaccine. What’s the incentive? So many federal agencies are still requiring the use of a mask, even with proof of a vaccine. If people can’t go maskless everywhere, what’s the point of getting poked?

Dr. Jill Biden doesn’t want to address any of the concerns. She just wants to scorn people for not getting the vaccine – which, in turn, is making her husband look weak.

After being booed, she shot back with another nervous laugh to say “Well, you’re booing yourselves.”

If there’s any Democrat they want to hear from, it’s President Biden himself. There’s no reason why the First Lady should be out pushing the vaccine as hard as she is.

She thinks that because she’s a doctor, she’s the most qualified to be out pushing the vaccine. Did she forget that her Ph.D. is in education, not medicine? Everyone is well aware that she’s not a medical doctor – so using her title to push a vaccine no one wants is ridiculous. So, she shouldn’t be surprised when she’s getting little turnout and a crowd of booing people.

A pop-up vaccination clinic at Ole Smoky Distillery only had a handful of people present who were willing to roll up their sleeves. Biden and Paisley visited it as part of their state-wide promotion. According to the Tennessean, only about 10 people were there to greet the First Lady.

Dr. Biden seemed to threaten people more than offer a message of hope. She told people that vaccines would be the only way to get back to music festivals, concerts, and open mics – the very thing that makes Nashville the special city that it is.

She might want to spend a day or two in Nashville. She’ll see that there are plenty of bars and restaurants offering live music every night. The state has opened back up, despite the low vaccination rate among its citizens.

So, she threatened everyone – and it was an empty threat at that.

Brad Paisley seemed to deliver a better message as he sang songs from country music legend John Prine and Dolly Parton. He also cautioned people to avoid disinformation regarding the vaccine. He told the audience that in West Virginia, people would come with buckets of water to put out a fire before the Fire department showed up. “Now we’re living in a time when disinformation is telling us that water won’t put out the fire.”

If the Biden administration wanted to get results, they should have kept the First Lady back in DC. Paisley could have handled everything on his own without hearing any booing from the crowd.