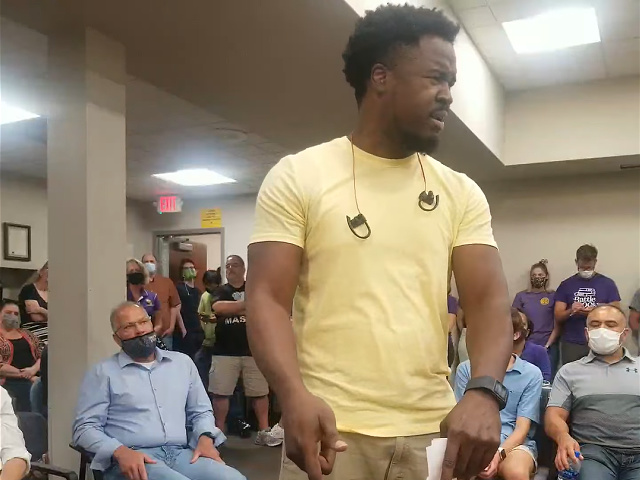 Ty Smith appeared as a guest Monday on Fox Business Channel’s Varney & Co. where he told host Stuart Varney the left actually had “nothing to say” in response to his comments at the board meeting because he was “the very type of person that they were talking about, that was down, and suppressed, and oppressed, and … disproportionate, and for me to be able to come out of that, to work my way through school to get where I am, I just call BS on it – it’s nonsense.”

Responding to Critical Race Theory proponents who insist on teaching systemic racism and white supremacy in K-12 schools, Smith asked parents and school board members at the meeting, “‘How do I have two medical degrees if I’m sitting here oppressed?”

“I can’t believe that we’re even talking about this because it is a complete lie,” Smith told Varney, reiterating that he is a successful black man who has never been held back by white people.

“Not one white person or system in place kept me from doing what I did, nor has it kept … from any of the kids that I’ve mentored,” he asserted. “It hasn’t kept them from graduating and going beyond what the oppressed narrative says we can’t do.”

“Yes sir, and their background is in therapy and orthopedics,” he replied, laughing at the narrative spun about him by the left:

What gets me is that, as soon as I said that, right, that seemed to have been the focus I noticed was mainly being played. But, I told like whoever these – I guess you’d call them the far left – it seems like they just wanted to focus on. So, now I have no degrees, I don’t have a wife, I don’t have any sons, I’m not a musician, I’m not a minister. I’m some actor that was placed there by the Republican Party and turns out I’m Candace Owens’ brother!

At the school board meeting, however, Smith was very serious about the dangerous effects of Critical Race Theory on young people.

He referred to the Marxist ideology that reduces all cultural issues to race and people to oppressors and victims as “a lie.”

“Of this, the reason why black folks can’t get ahead because of white folks? Are you kidding me? This is what we’ve come to?” he asked. “I can’t believe we even talking about this right now.”

Smith continued Critical Race Theory peddles an ideology that is the opposite of what Dr. Martin Luther King Jr. preached during the civil rights movement of the 1960s.

“Martin Luther King said he wanted his kids to grow up in the world where they are judged by the contents of their what?” he asked attendees at the meeting, who immediately responded with, “Character.”

“Their character,” Smith emphasized. “Not their skin. If they letting this stuff go on right now, it is absolutely going the complete reverse of what he’s doing.”