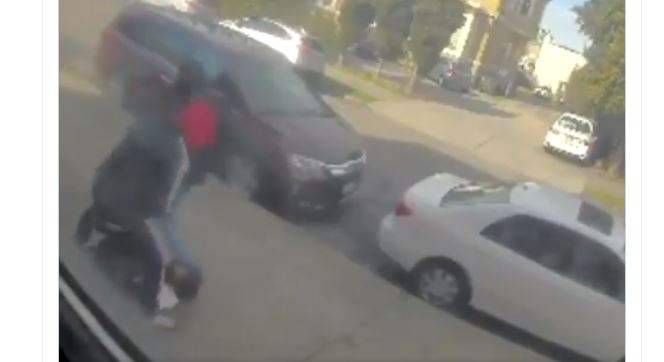 Democratic leadership is going to drive this nation into the gutter and we wish that this was a hyperbolic statement. This is the story of a 70-year-old grandmother who cannot even peacefully exist in her own community. It’s the America that the liberals want. All she wanted to do was get home from the bank and that was not even possible.

𝟳𝟬-𝗬𝗘𝗔𝗥 𝗢𝗟𝗗 𝗚𝗥𝗔𝗡𝗗𝗠𝗔 𝗔𝗦𝗦𝗔𝗨𝗟𝗧𝗘𝗗 & 𝗥𝗢𝗕𝗕𝗘𝗗: Not again!
⠀
A young woman told me her grandma was robbed while coming home from the bank February 3rd around 11am. 6th Avenue and International Boulevard in Oakland. pic.twitter.com/eqbDPL3jbx

How can anyone see this violence and think that we are headed in the right direction? This mugging happened at 11 AM, which makes things even more ridiculous. Biden is not going to do anything about these problems because he is committed to discussing the things that make him look good. Take his son’s book, for instance.

The same people who accused the previous president of using his office to enrich his family members are not saying much right now. We were told that it was never okay for a president’s family members to cash in. Now, Hunter Biden wants to sell some books and that’s okay. His father can use his office to promote him and let him make some money.

What about all of the people out there with real problems that are looking for some help? This innocent grandmother merely wanted to run a simple errand and ended up being mugged in the process. We don’t want to connect the dots to the dawdling when it comes to the stimulus package but it is hard not to at this point.

How much longer is Biden going to wait? The American people are in need. Grandparents cannot even walk the streets without being mugged. In addition to the lack of stimulus, Biden is also responsible for the anti-police sentiment that is brewing in this nation right now. Our cities are clearly in need of help but Biden would rather act like everything is okay.

Remember, this is a party that determined we needed fewer officers, not more. That is because they are safe and sound, while the rest of us wonder if we are going to be attacked by our neighbors. This is a dangerous combination. If the police are not going to be allowed to do their jobs and Biden is not ready to offer up any sort of meaningful assistance?

Things are only going to continue to go in a dangerous direction from here. If he continues to take his sweet time helping the American people, more and more are going to resort to crime. All of the innocent citizens who are just trying to survive in the meantime do not deserve to have their lives threatened on a daily basis.

This is why Biden needs to act now. The rule of law is no longer being respected and this is always what happens when Democrats take over. They only care about creating an America that looks good to their voters. Everything unsavory is swept beneath the rug so that they are able to remain in power.

Stories like this one cannot be shared because they go against the happy go lucky image of America that they love to peddle. Biden wants everyone to think that all is well because he is in office. The Americans who only pay attention when there is an orange man for them to yell at may believe that we are on the right path. The rest of us are tired of the nonsense and we know better.

Where is the justice for all of the people who are forced to live in the America that Biden and his cronies have left behind? The powers that be do not care what happens any longer. They have made that abundantly clear. The rest of us are now left to sit around and wait for the stimulus checks that are never going to come. They make millions on our dime and we are told to wait for table scraps. What a country!