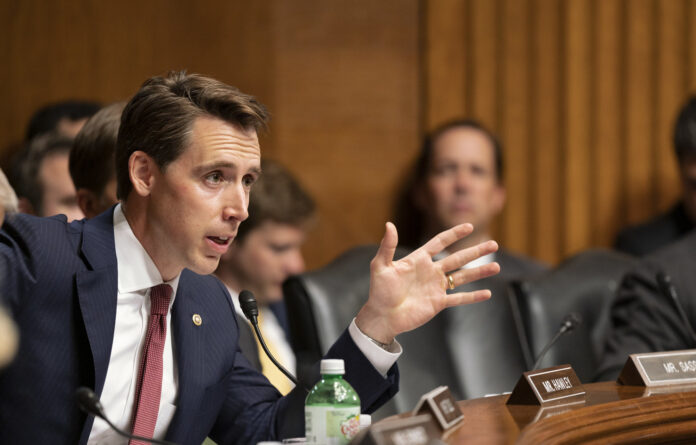 As liberals and Black Lives Matter protesters look to defund the police, Republican Representative Josh Hawley out of Missouri has a better idea. What about actually funding the police so that they can address the rise in crime?

Liberals have had to learn that defunding the police and letting the criminals win isn’t the way to cut the crime in a city. Crime is on the rise – and if we don’t start treating law enforcement properly, more are going to walk off of the job.

Hawley’s plan would be to hire 100,000 police officers around the country. It could boost morale in police departments and focus on the crime – including a surge in homicides and violent crime.

There’s a harsh reality that the Biden administration has to face: According to a Breitbart News poll, 73 percent of Americans believe crime is higher under President Biden than it was under former President Trump.

Why is that? Oh, right…Biden has been allowing the protesters to have their way. Even if they are arrested, most cities won’t prosecute the protesters and rioters, regardless of how many crimes they may have committed.

It has set a dangerous precedent. Criminals think that they can literally get away with murder in Biden’s America. With more cities defunding or reducing budgets, it’s causing crime to spike.

Biden has finally realized that it’s time to address the crime statistics. And Hawley’s proposal comes out just in time to be heard.

Hawley’s statement explained that American families just aren’t safe, but they can be with his proposal. “This is not the time to defund the police or vilify them, but to support the brave men and women in blue – and put more of them on the streets.”

His proposal would include a grant to local communities to support hiring an additional 100,000 law enforcement officers. It would also increase penalties for those who assault federal officers as well as damage federal courthouses. He wants to expand concealed-carry rights to federal prosecutors and judges. Further, he wants to establish a new criminal offense for those who target a person based on their status of being a law enforcement officer.

Finally, we have someone who has not only come up with a solution but one that could actually work.

We let the liberals try out their “defund” movements in various liberal cities. Chicago, Minneapolis, and Portland are some great examples of how defunding the police is not going to work. Crime has surged in all of those cities. Some police officers have been so disgusted by the new liberal laws that they have chosen to retire early rather than work in a city where criminals are the ones turned into heroes.

Biden says that he wants to address the rising crime in the country. Yet, he hasn’t unveiled any kind of plan. Meanwhile, the far-left want to focus on gun control laws. Some even have the brilliant idea of building fewer prisons and defunding the police entirely.

The ultra-liberal have this random idea that only people of color are being targeted and arrested. By getting rid of the police, people of color can simply live their lives and crime won’t occur.

It makes no sense. People of every color commit crimes for countless reasons. If the police aren’t around, crimes will still happen. Only, the innocent won’t have a place to turn and the criminals will get to roam free.

More people need to get on board with Hawley’s recommendations. He wants to support the blue and ensure that the innocent people of America are being protected. We already know the way to make this happen. We need to rely on law enforcement officers to do their job – and we need to make the various departments around the country stronger than ever.