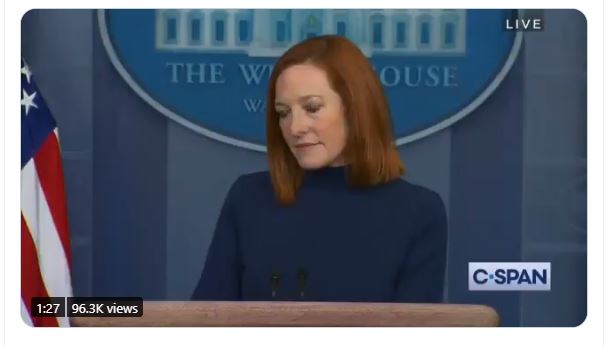 There has been no lack of memes and video montages made of the new Biden administration Press Secretary Jen Psaki doing what most would consider an excellent avoidance maneuvres most of the questions that are put forth by reporters during her press briefings.

However, earlier in the week, at least one reporter got a puzzling if not outright embarrassing response out of Psaki when he inquired “When is it that the Biden administration is going to let the thousands of fossil fuel industry workers, whether it’s pipeline workers or construction workers, who are either out of work or will soon be out of work because of the Biden EO, when it is and where it is they can go for their green job? That is something the administration has promised. There is now a gap, so I’m just curious when that happens when those people can count on that?”

Psaki seemed astonished that a reporter would dare to question when a promise would be fulfilled by the unquestionably valid and loved by all Biden administration, replying “I certainly welcome you to present your data of all the thousands and thousands of people who won’t be getting a green job. Maybe next time you’re here you can present that.”

The interview only goes downhill from there:

REPORTER: When will the Biden admin. let thousands of jobless fossil fuel industry workers know where they can go to get their Green Job?

PSAKI: “Well, I certainly welcome you to present your data of all the thousands & thousands of people who won’t be getting a Green Job.” pic.twitter.com/HzHFhmig8g

Paski was clearly combative with the journalist, which is not in and of itself uncommon, especially after former Trump administration Press Secretary Sarah Sanders went to war with the press on multiple occasions. What was uncommon was how the communications officer seemed to first take the defense that what the reporter was talking about was totally foreign to her.

So unexpected was her response that at first the reporter seemed dumbfounded and gave the impression that he didn’t bother to bring the statistics to back himself up. Once he gathered his senses about him and realized what was happening, he then did present insurmountable evidence in the same way that dozens (if not hundreds) of media outlets, local and national, have been reporting for the short weeks since President Joe Biden axed so much of the oil and gas industry.

Once presented with said facts, Paski did what so many seem to be doing in positions of power, which is changing her tactic to actually try to defend the controversial tactic, once she couldn’t avoid it.

While she had somewhat sufficiently vague promises for those whose formerly well adapted personal economics are now under peril of death and destruction, it was difficult to watch the press secretary and see her reaction as anything other than offensive to the average American.

In addition to seeming offended that the journalist would question her, she seemed incensed that there would be a presumption of guilt on the part of an administration that has already admitted to enacting the new policies. Their true understanding of the damage done was shown by her combative defense of Biden’s decision.

Instead of talking about the positive effect, Biden’s decision could have on the environment for future generations (which is what they claim to believe, and why they supposedly enacted the rules) they went on the defensive. Likely because the abundance of the heart spoke up, knowing it was in the wrong.

But hey, at least that bad orange man who constantly spoke to the people without going through the media is out of office. Don’t worry about whether it was legal or how much international influence there was, or the fact that they spent the past four years desensitizing Americans to all terminology related to foreign interference, just take your lumps and let the arrogant New York and DC liberal elites who have never actually worked blue-collar jobs, tell you how things should be.