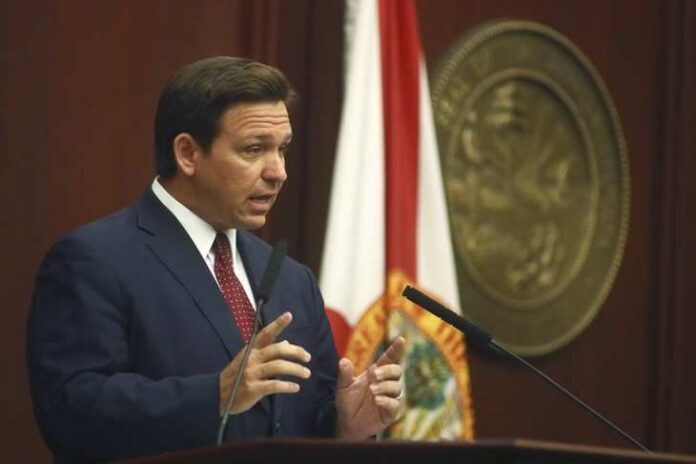 The media is known for being relentlessly wrong on many of their stories. They make things up about people they need to smear and lie to cover up the trail that leads to their incrimination. For example, they attacked Donald Trump while he was in office, and they accused him of all sorts of stuff that proved to be inaccurate and fake. But after he left office, they turned their beady eyes on Ron DeSantis.

The media did not expect Ron DeSantis to be just as extraordinary as Donald Trump in handling and beating the media at their own game. And now that he is a significant contender for the 2024 presidential nomination, they are more worried than ever that he will beat them down and destroy every Democrat he comes across.

DeSantis is being attacked by just about every news agency around. The Floridian governor was attacked by the Washington Post and The Hill. These two lying media centers lied in their titles and gave fictitious information about DeSantis.

One headline stated, “mandate[d] surveys of Florida students’ beliefs.” And The Hill stated that he made up a law that “require[ed] students, faculty be asked to declare their political beliefs.”

Both of the headlines were lies, and the content of the stories could not back up what they were trying to prove.

The Democrats are people that do not read the content. The media knows that they do not read, so they can get away with printing a bunch of nonsense. Their followers simply read the headlines and think that they know all the facts. But all they get is a bunch of lies that they try and believe as truth.

The sources they try and use are never revealed because they have anyone that can verify their stories. So, for example, the Hill tried to tell people that “the legislation will require public universities to survey students and staff annually about their beliefs to assess ‘viewpoint diversity’ on campuses.” And to compound the problem, other news outlets passed on the lies and tried to make people believe that DeSantis is the devil incarnate.

The mass media did the same when they fought with Donald Trump. Then, they had much of the same issues they are having now because they never could find anything to pin on him.

Ron DeSantis did not say any of the things that he is said to have mentioned. However, the documents tell precisely what was said and prove that the media is a bunch of lying thugs.

The document reveals that “The State Board of Education shall select or create an objective, nonpartisan, and statistically valid survey to be used by each institution which considers the extent to which competing ideas and perspectives are presented and members of the college community, including students, faculty, and staff, feel free to express their beliefs and viewpoints on campus and in the classroom.”

The truth is that students are now free to express themselves without having to fear that the teachers or staff are going to retaliate and expel the students for having ideas that are not on the approved liberal nutcase list.

The liberal poison taught in American classrooms silence students and kept them from coming up with ideas that make America great. The Democrats need people that do not question what they are told and never challenge information that is said to them. Instead, what they want are a bunch of zombies willing to kill for liberal beliefs.

The students want a place where they can think for themselves. They are tired of being told what to believe and what to answer on their tests.

America is great because of the diversity that exists. However, new ideas are a danger to liberals because people who think for themselves will not believe the fake news and attacks that the media throws at Ron DeSantis and Donald Trump.