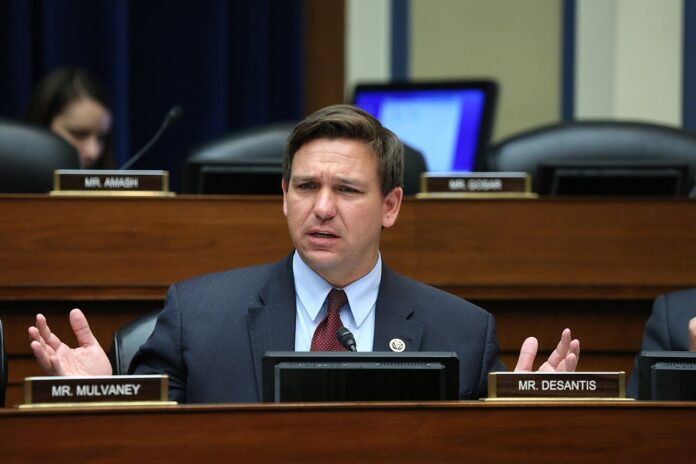 Leave it to the mad media to keep attacking a target they know they cannot beat. Ron DeSantis is the one person that worries them the most. He has beaten them at every turn, and he continues to put them in their place every time they try and smear his great name. And now that he has the countries attention, they are doubling their efforts to tear him down, so he is not such a powerful foe in the next election cycle.

Their latest attempt to attack the powerful governor came by way of a 17-year-old kid who is said to be attacking DeSantis’ fight against the Critical Race Theory that the liberals want to teach in schools. But the history they want to push is nothing more than a fake narrative designed to teach kids to hate their country.

The state of Florida school board has determined to ban destructive teaching from the classrooms. But now, the media is coming back and attacking the decision and claiming that the theory is not as wrong as everyone is making it out to be.

Uma Menon is the kid that the media wants to use to tear into DeSantis with. Menon may think she will be a hero, but she will be used and tossed aside once the media gets what they want out of her.

Menon’s paper stated, “Critical race theory (CRT) is an academic framework for looking at systemic racism. Though states are banning it from being taught in schools, most teachers don’t use the term when discussing racism and don’t require students read the work scholars who use that framework.”

They may not use the terms used to describe the dangerous teaching, but they indeed teach it in the schools. Menon is for the destruction of America by supporting the Critical Race Theory.

The media’s latest attempt is to use Menon to make DeSantis look like he is crazy by seeing issues where there are none to be found. Except the media misses the mark by attacking DeSantis because it was the Florida State school board that decided to ban it from the classrooms. She tried to claim that DeSantis is just trying to “politicize racial justice” and make an issue out of something not there.

Menon went on in her paper to say that She then claimed that “never once did I hear the phrase ‘critical race theory’ in any of my classrooms. Given that public school districts in Lake, Marion, Osceola, Seminole, and Orange counties have stated that critical race theory has never been a part of their curriculum.”

Menon and the mass media fail to reveal that the theory is taught in a variety of ways. And the part they do not want people to realize is that the content is similar to the debunked content of the 1619 project. Some Democrats changed the name of the old material and tried to push it off as something new.

Menon is a scapegoat being used by the Democrats as a tool to try and hurt DeSantis. They have to rely on a 17-year-old kid to try and make a flawed point never to be considered truth.

The Democrats are grasping for straws with their attacks on the Floridian governor. They are desperate to find anything they can use against. But attacking him the way they are this time around playground politics. Anytime a person has to attack the character of another means they have already lost the argument. The media does not know when to give up.

Menon’s false claims are just going to make DeSantis look like a superhero. Her words will be exposed as a lie, and she will have damaged her future by listening to the nonsensical rhetoric of the liberal left. And she will look back on the moment and wish she had never said the things she did about a man that gave her the best education in the country.

Ron DeSantis is another patriot that works for the people. He does not just work for the Republicans, as he looks out for what is best for the liberals. The problem is they like to bite the hand that keeps them safe.