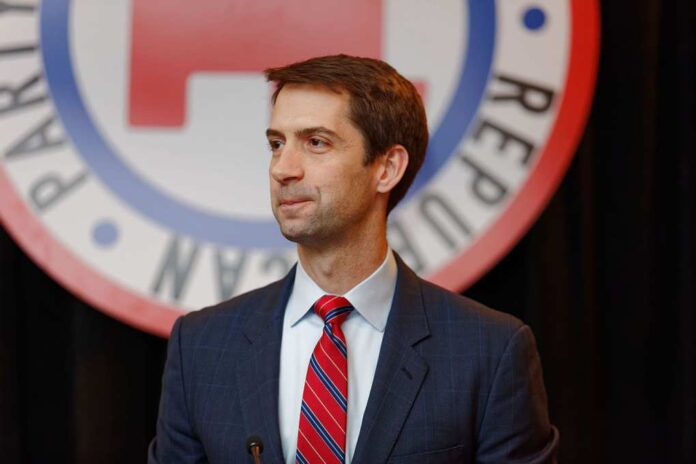 There are few Republicans who can shed the light on the ugly truth quite as brightly as Tom Cotton. The Republican Senator from Arkansas is outspoken. He’s also been monitoring the crime across the nation.

As Democrats love to try to point the finger and blame someone else for their misfortunes, Cotton is there to show them the truth.

Crime is surging all across America. President Biden is aware of it, though he’s not doing anything about it.

Of course, there are plenty of liberals with ideas on how to end crime. Ilhan Omar wants to defund the police. Alexandria Ocasio-Cortez wants to stop building prisons.

The real problem is a political one. The liberal cities are the ones that are facing bigger bouts of crime. Perhaps the problem is the way in which liberals are handling crime. Though they’d actually have to try to handle the crime first – and that’s the real problem.

One look at Chicago will tell you everything you need to know. It seems as though Mayor Lori Lightfoot has decided that ignoring the problem is the best approach. And every week, her city is making national headlines because of the number of shootings and murders that take place.

Cedric Richmond, a Biden advisor, was recently caught saying that Democrats in Congress were trying to pass emergency rescue plans for cities that were laying off the police – and that when Republicans objected to it, they were defunding the police.

That’s almost funny. Republicans were objecting to rescue plans for the liberal cities because they had poorly spent and kept the cities in lockdown for far too long during the height of COVID.

If anyone’s been responsible for defunding the police, it’s the Democrats – and there are plenty of liberals who have been vocal about cutting funds from police departments.

Tom Cotton was recently on the Mark Levin program “Life, Liberty, and Levin.” The senator had quite a bit to say regarding the Biden speech about how gun control initiatives would help with the rise in violent crime. Cotton pointed out how the Democrats love to blame the pandemic. Other countries dealt with the pandemic and they didn’t see a spike in assaults, murders, and other crimes.

Cotton can identify the reason for the crime wave. The first answer points to the Democrats wanting to let “serious criminals out of jail.” The second is because there are too many radical (and liberal) prosecutors and governors “refusing to send serious criminals to prison.” There’s another answer, too – “Democrats for more than a year now have been attacking the police, calling for defunding the police or abolishing the police, discouraging them from vigorously doing jobs to keep communities safe.”

The Democrats really don’t want to bring up crime in the 2022 elections because they’ll lose. As much as many of them want to turn it around and blame the GOP, they don’t have a leg to stand on.

The ugly truth is that the liberals are responsible for the surge in crime. And if Biden thinks that gun legislation is going to change things, he’s sadly mistaken.

Plenty of people will abide by the law to obtain a gun. However, they will break the law at one point or another.

And what about the number of assaults? People can still assault people without having a gun. Biden’s plan doesn’t focus on any of the crimes being committed except for shootings. He’s completely out of touch with reality.

Cotton points out another problem. Biden has picked some dangerous individuals to lead the Department of Justice. This includes Vanita Gupta and Kristen Clarke – both who are activists for the ‘defund the police’ movement.

Oh, the truth is ugly – and liberals won’t be able to change it no matter how hard they try.