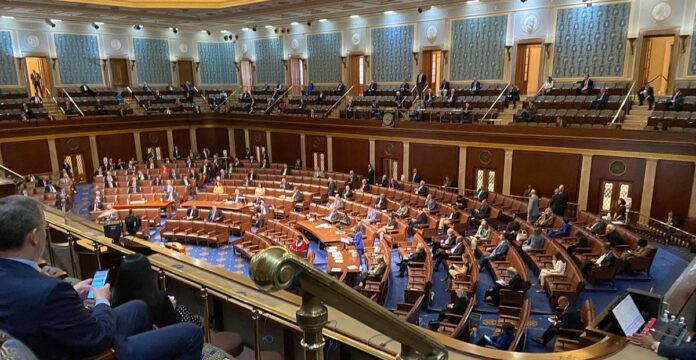 As you well know, Republicans made great strides this past year in overtaking the House majority. Instead of losing seats, as the Democrats swore they would, the GOP gained seats. And by no small number.

With New York’s 22nd Congressional District race officially over and a Republican win, the majority has never been closer. According to the now final count, Republicans were able to flip a total of 15 seats in 2020, narrowing the majority gap by a mere nine seats.

Just in: Anthony Brindisi (D) has conceded to Claudia Tenney (R) in #NY22.

But nine is not zero, and so the party has some work to do if they are to take the majority and House Speaker Nancy Pelosi’s job in the fall of 2022. This is particularly true since the Jan. 6 incursion of the capitol in which the Republican Party and Trump followers, in particular, were blamed for violence and insurrection.

According to The Hill, at least some 140,000 Americans unregistered as Republicans during the last month in as many as 25 states. It has been noted that most of these voters don’t want to have anything to do with a party that condones the hateful actions that took place at the capitol.

Of course, this is what the media wants us all to believe at this point.

Nevertheless, plans are being made to grow the party and bring back those it may have lost.

According to the National Republican Congressional Committee or NRCC, which is tasked with recruiting for upcoming elections and growing the party’s congressional footprint, they are going on the offensive.

What this means is that they have come up with a rather specific list of “targets” or congressional districts they believe can be flipped within the next year. In a statement releasing the list of targets on Wednesday, the NRCC also refers to the districts as “offensive pick-up opportunities.”

At the top of the list are 29 districts whose Democratic margin of victory in 2020 congressional or presidential races was only 5 percent or less. Next comes eight Democrats who won by less than 10 percent in 2020. These are then followed by another ten seats which are up for redistricting in the near future and, therefore, could become more competitive.

.@ElaineLuriaVA is a hypocrite. She denounced taking corporate PAC money in 2018, but accepted $30K from corporate PACs to pay off 2020 campaign debts. #VA02 deserves better than a fraud like her! https://t.co/RRoEaKqB8m

According to the NRCC, the task is more than doable.

As it stands already, Americans, while distressed about the capitol incursion and continued violence in various areas, are already seeing a not so positive reaction to newly-elected President Biden and his staff’s leadership.

NRCC Chairman Tom Emmer recently said in a news release, “We are just a few weeks into the Biden administration, and Americans are already seeing the job-killing initiatives House Democrats support.”

Why House Republicans are primed to take back the majority:

All across the nation, communities and individual American workers are watching their dreams slip away thanks to Biden’s seemingly never ceasing executive orders. With one flick of his wrist, he canceled over 11,000 American jobs. And that was just one project.

In another move, he has nixed construction of what has become known as Trump’s border wall, which employs countless more hard-working Americans, not to mention protects our citizens from those looking to illegally get a free ride and benefits that should go to Americans first.

Additionally, Biden has changed immigration policies to allow more illegal immigrants access to our already limited jobs and even to allow them to vote in the future.

Needless to say, he’s not making all that Americans happy about Democratic control.

Emmer added that his and NRCC’s task would be to “relentlessly hold House Democrats accountable for their socialist agenda and ensure voters understand the damaging impact policies like defunding the police, government-run health care and ending the Keystone XL Pipeline will have on American’s everyday lives.”

Biden promised that he would bring unity to our nation. And yet, with all these executive orders, and ones that seem to only focus on undoing what Trump did, he’s only making division more possible. Taking jobs from Americans and giving them to illegals isn’t going to help Americans see much beyond the reality that the left is bringing us toward.

And that will only make the NRCC’s job of growing the Republican Party easier.