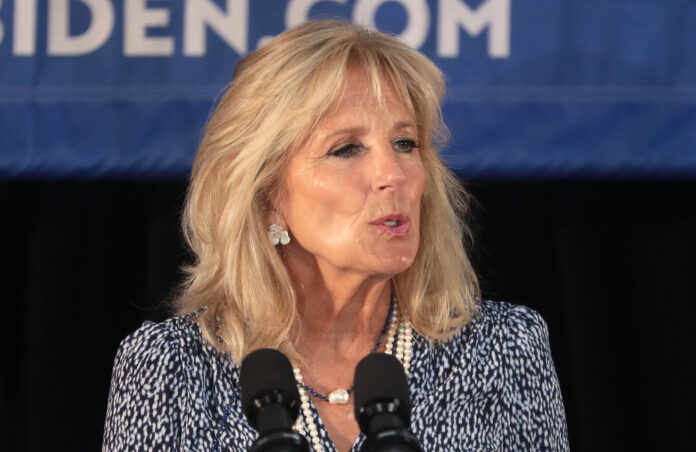 We’re supposed to believe that Joe Biden is not only our president but also a completely capable one.

Joe Biden won’t submit to a mental health test. He’s also not jumping on Air Force One to head to Japan for the Summer Olympics.

Anytime the president should be somewhere, Jill Biden is stepping in to fill his spot.

Americans voted for Joe Biden to be the president. Dr. Jill Biden became the First Lady simply because she was married to him. We didn’t vote for Dr. Jill Biden, so we can’t expect to be happy that she’s playing president.

At this point, Dr. Jill Biden is playing politics better than both the president and the vice president.

The president is the one who should be representing the country, especially at such a world stage as the Olympics.

Yet, it’s already been rumored that it will be First Lady Jill Biden showing up at the Olympics in Tokyo, Japan.

Oh, and that’s not all. She’ll also be hosting a few diplomatic meetings.

Did we miss something on the ballots where we were voting for Jill instead of Joe? Was there an asterisk that every American in the country missed?

The administration is sending the wrong Biden to Japan – and the Japanese couldn’t be more thrilled.

A Japanese paper, Yomiuri Shimbun, revealed that the First Lady will be attending the opening ceremony and meeting with Yoshihide Suga, the Prime Minister of Japan, along with several other senior diplomatic officials.

Does Dr. Biden have the ability to enter into any agreements for the U.S.? Absolutely not. As the First Lady, she has no governmental power. Yet, the Biden administration is content with her meeting with the officials of a country that has been a major ally for the U.S. to ensure Asian relations.

These are the questions that many are beginning to ask.

It’s expected that French President Emmanuel Macron will be in attendance. His country will be hosting the 2024 Paris Olympics and Paralympics.

Dr. Jill Biden doesn’t seem to mind. Perhaps that’s the scariest part. She has stepped in for Bien on a daily basis when it comes to political engagement with the public. And no one within the administration seems to be ready to tell her that it’s not her place.

It’s one thing for a wife to support her husband when he’s running for office. It’s another to hip check him so that she can pretend as though she’s running the office. We saw the first scenario during Biden’s campaign trail. Now, we’re seeing the latter.

If she were a politician, we could understand. If we elected her to office, we could accept her presence as she is popping up everywhere. She’s neither a politician nor an elected official.

And she’s starting to embarrass the administration.

She’s been visiting vaccination sites around the country, urging people to get vaccinated. She’s also been getting booed because people don’t want to be pressured.

And, she was an embarrassment when she attempted to speak Spanish to a group of people in California. She wanted to say “Si se puede” to mean “Yes, we can!” Instead, she said, “Si se pwadueh,” which is a complete and utter butchering of the Spanish language.

Can we please put Biden in her place? The First Lady cannot be the president. And, she most certainly should not be meeting with foreign leaders in place of her husband.