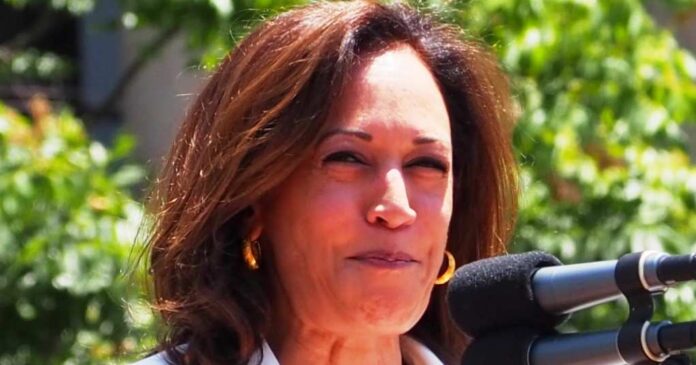 Kamala Harris realized that she was about to piss off an entire country if she didn’t visit the border. The call from both the Republicans and the Democrats was getting louder.

So, she visited…but she didn’t like it. And, she did one of the most ridiculous things that she could have possibly done.

After three months, the VP finally showed up to the border since the crisis wasn’t going to go away on its own. She did this more as a publicity stunt to raise public opinion of her than anything else.

It seems that Harris wants to forget that Biden promised migrants a pathway to citizenship. She also wants to ignore all of the executive orders that were drafted within the first days of Biden’s time in the Oval Office that reversed the immigration control Trump had created.

Harris had said that she wasn’t going to visit the border at all. However, Trump had publicly promoted that he and Texas Governor Greg Abbott would be visiting the border. Suddenly, Harris was on Air Force Two and headed to the border. She was not about to be outdone by Trump. Though, she will be because there’s a difference between the two of them. Trump cares about the immigration crisis and Harris doesn’t.

Harris saw plenty while she was at the border. She toured the border patrol facility. She also stopped at the Paso Del Norte port of entry, which also allowed her to meet with a few girls who were detained at the processing center.

While Harris was visiting the border, she met with several leaders of immigrant rights organizations. The purpose of her meeting with them was to discuss the root causes of immigration. After all, she refuses to believe that the Biden-Harris administration’s liberal approach to immigration is the cause.

The crisis that the administration has caused is not focused solely on immigration, either. It’s also humanitarian – especially since the trip is deadly for many as they face triple-digit desert heat.

What Garcia seems to be unable to understand, however, is that there are still immigration laws that need to be followed. Bombarding the borders isn’t the best approach – nor is it a legal one.

Title 42 is still being used. It was implemented by the Trump administration to expel migrants from the U.S. into Mexico. The Biden administration hasn’t gotten rid of it yet – and it’s the only thing keeping at least some semblance of order.

It doesn’t appear that Harris is planning to get rid of Title 42, either.

Linda Rivas, the executive director for another nonprofit, Las Americas, met with the VP. Rivas explained that “The Biden-Harris administration must improve the asylum process and end the cruel border policies that ripped families apart.”

That doesn’t seem likely, either.

Harris doesn’t seem interested in helping the immigration crisis or the immigrants themselves. She made the visit because she felt as though she was being forced to.

As for her comments regarding the situation, she seemed to blame it all on former President Trump.

Senator Ron Johnson of Wisconsin pointed out that Harris’ visit also didn’t include some of the more “acutely hit” areas of the southern border. He believes that was done in a calculated way so that the media didn’t see just how bad things have gotten. According to Johnson, “They took her to a point in the border where she wouldn’t see the crisis and so the press wouldn’t report on the crisis.”

Essentially, Harris spent taxpayer dollars to continue doing what she’s been doing since being appointed as the immigration czar: deny that there is really an immigration crisis going on.