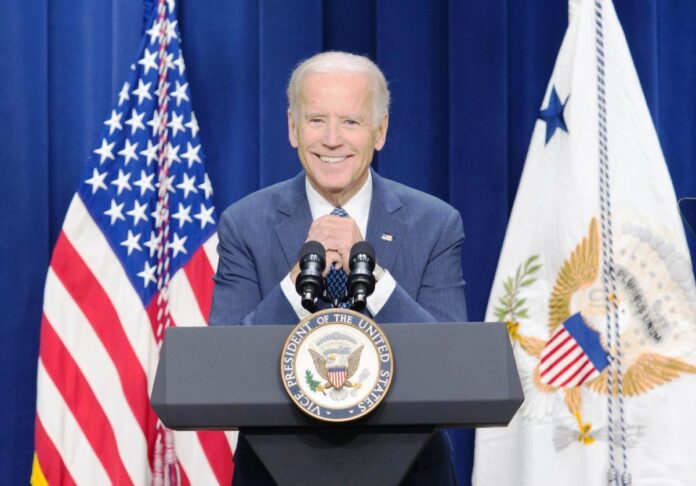 We’ve all known that Joe Biden is creepy. We’ve all seen the photos of him unsuspecting women. We’ve all heard the interviews where he makes inappropriate comments.

Becoming President of the United States of America hasn’t changed any of that.

Prepare your barf bags. Biden was caught flirting during a video conference with healthcare professionals.

Biden and Harris hosted a conference with professionals working at the State Farm Stadium in Glendale, AZ. The football stadium has been turned into a vaccination site.

The video conference should have been straightforward. The president and vice president received a virtual tour. They learned about the procedures that were being used by the doctors and nurses to determine who gets vaccinated.

Biden must have gotten bored. He couldn’t manage to keep his creep-factor in check.

Biden to nurse: “Are you a freshman? … You look like a freshman.” pic.twitter.com/dWvueWXK8m

The nursing supervisor, Brittney Hayes, was explaining the process for people getting shots. That’s when Biden decided that it was appropriate for him to ask her age.

Didn’t anyone ever tell Biden that you don’t ask a woman her age? It’s rude, it’s inappropriate, and it has nothing to do with whether this woman is capable of delivering vaccines.

Biden proceeds to flirt by asking if she’s a freshman at the university. She says that she’s not and tries to explain that while she’s from Arizona State University, she’s the head charge nurse at the stadium’s vaccination site.

Biden can’t seem to let it go. Rather than talking about the video conference, he wants to get fresh with her. He makes another comment while chuckling, saying that she looks like a freshman.

Through the mask, Brittney Hayes thanks the president.

It’s rude and a bit condescending, though. Because she appears young, she must be a freshman in college? That would put her, on average, at 19.

Biden can’t seem to believe it. Since no one prepared for him to be so creepy, there were no cue cards to follow. So, he says what comes through his mind: “And you’re a – nurse?”

At this point, it was well established that she’s a nurse. Knowing that the video conference was streamed publicly should have been enough to keep Biden in check. Clearly, it wasn’t.

It’s clear that Hayes is now getting frustrated. She confirms that she’s an RN and has been so for about nine years. Most RNs hold a minimum of an associate degree though many have a bachelor’s degree.

A quick camera glance at Kamala Harris will show that she has a fake smile on her face. She’s likely trying to get the president through this cringeworthy moment as quickly as possible. Of all the times Biden decides he wants to get creepy, he chooses now.

The video conference wasn’t designed for him to get flirty. It was designed to learn more about vaccination sites – and for Biden and Harris to show their support.

It was beyond awkward, and there wasn’t anything for Harris to do. She had to sit there and watch it unfold center stage. If she said anything, it would have only called more attention to it all. As it was, everyone knew that Biden was getting flirty and inappropriate.

Kamala has to look away as soon as Biden starts chuckling. Then, it’s clear that Biden gets flustered. Perhaps it’s because he realized that he let his creepiness ooze out a bit too much.

Someone on Biden’s media team really should have prepared some cue cards. They should have known that he’d ask inappropriate questions and make creepy comments.

There have been allegations against him in the past – numerous women have accused him of inappropriate touching and hair-sniffing.

Biden doesn’t seem to be embarrassed. At the very least, he needs to be told that it’s inappropriate for the president to ask a registered nurse her age and ask if she’s a freshman. It’s insulting, and Kamala Harris may have actually thrown up in her mouth a bit. She’d be justified, too. It was just disgusting.