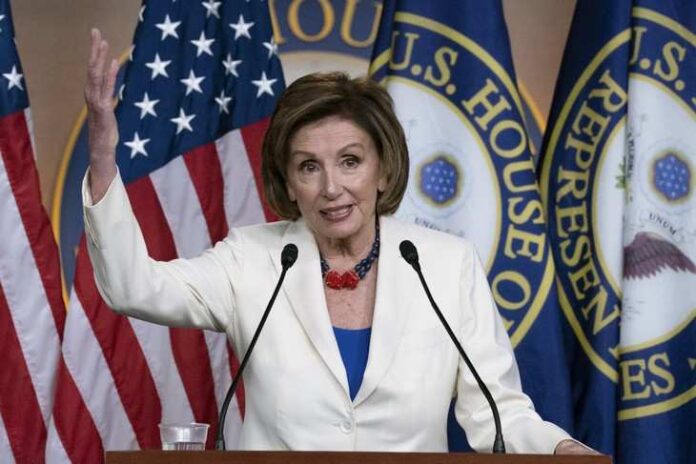 Nancy Pelosi and Joe Biden think that they are geniuses who can play us all for fools. We see through their good cop/bad cop routine, though. This nonsense is as transparent as it gets. Biden’s got the good cop role down pat. He’s willing to work with the GOP and fancies himself as a man who is willing to compromise to get things done.

Pelosi, on the other hand, seems to pride herself on being one “tough” customer. In reality, she kicks and screams whenever she doesn’t get her way. She’s willing to blow up any deal as long as she is not getting what she wants. In this instance, she’s not going to sign off on an infrastructure bill unless she manages to slide a massive social welfare package through as well.

Progressives believe that they are going to get what they want by linking these bills. That’s how they are putting the screws to Joe Manchin. Manchin is supposed to jump when they say “how high?” because the infrastructure bill that he is so proud will go bye-bye if he does not play ball. In other words, the Democrats believe that they have all of the leverage at the moment.

There’s just one issue with this plan that they have neglected to take care of. Biden has lost his marbles and regularly seems to forget that he is supposed to be playing the good cop. His team is left to pick up the pieces and re-frame the conversation. The House Democrats were shaking their head over this, as they watched Biden’s handlers rush to fix his mistake.

One of them even referred to the whole situation as a “f—ing clown show”, which are some strong words but we can’t deny the level of truth here. Mitch McConnell is now trying to smooth the situation over by asking Biden to work on Pelosi. If she removes the link between the bills, this allows the GOP to continue to blame Biden….regardless of what ends up happening going forward.

Sen. Joe Manchin supports a Democratic-only reconciliation bill on infrastructure, which means that Republican hopes of stopping the Biden agenda have been likely dashed. pic.twitter.com/6fTABwzMI7

To the surprise of absolutely no one, Pelosi is not going to play ball. She is going to continue to make this as difficult as possible because that is her M.O. and we all know it. Pelosi relishes playing the bad cop and won’t give that up just because Mitch McConnell says so. The Hill has more:

“What the Speaker has said, and I totally agree with her, is that we’re not going to vote on one until the Senate sends us both,” Rep. John Yarmuth (D-Ky.), chairman of the House Budget Committee, told reporters after the meeting. “That’s not changed.”…

Pelosi … is standing her ground, supporting the liberals in her caucus who are wary that enacting the smaller infrastructure bill — which the Senate is shooting to pass before the August recess — would erode the momentum behind the larger partisan package, which Democrats intend to pass by reconciliation.

The liberals are demanding that the Senate pass the second measure before the House votes on either, and leadership appears to be well on board.”

How are the Republicans going to react and will they continue to play along? These are the questions that have to be answered now. Will Pelosi’s precious progressives play along, too? The younger members of the caucus are already signaling that they will but what about the moderates? These are the folks who have to be considered because they are less likely to play ball going forward.

Manchin is not likely to budge and we’ll leave you with a telling quote from one of the many centrist Democrats who have spoken out against this. “I think it’d be incredibly disappointing if there’s a bill from the Senate, waiting for our action, and we choose to delay it arbitrarily,” says Rep. Abigail Spanberger (D-VA). No one wants to let the potentially historic infrastructure bill die on the vine….except Pelosi!