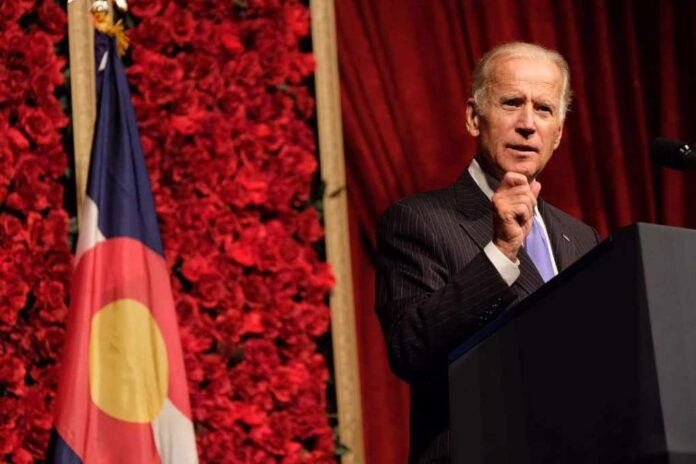 It seems as though President Biden can say anything and the liberal media just goes along with it. He’s lost his mind – and he’s challenging Americans to move against the government.

“If you think you need to have weapons to take on the government, you need F-15s and maybe some nuclear weapons.” Biden made this comment when discussing gun violence.

Mr. President, are you inviting Americans to start buying F-15 fighter jets? Would you like for us to trade our AR-15s for nuclear weapons?

Biden was clearly confused during his speech. It’s not a shock, but he has to be careful about what he says. The Second Amendment is what most Americans cling to. The president is trying to say that there have always been restrictions on the amendment – and this is where he’s going to earn a “false” badge on his speech…

Biden explained that “from the day it was passed,” it would limit the type of weapon that people could own. He went on to say, “You couldn’t buy a cannon.”

Oh, but you could.

American life has changed quite a bit since the 1700s. They didn’t have an Outdoor Man where you could just walk in and buy a cannon. However, there were plenty of blacksmiths making cannons. Americans were making and buying cannons. They were also making other weapons. Why? The Second Amendment allowed them to have the weapons that they desired.

Cannons were big, though. They were also expensive. So, it wasn’t something that the average American owned. But those who wanted to buy one most certainly could.

The point that he’s trying to make is that people can’t have whatever weapon they want to move against the government. He believes that there have always been limits on what can be owned and who can own them.

Biden, in his weakened mental state, told Americans that if they plan on challenging the U.S. government, they’ll need fighter jets and nuclear weapons.

Does he have any idea what he just did? He might as well have just sent out an open invitation for any radical to see exactly what they can use to challenge the government.

No one wants to take on the government…at least not yet.

The only reason why people want to own guns is that it’s their right to do so. It’s the way to protect against a tyrannical government. If the government oversteps, people have the right to defend themselves.

Surprise, the president is confused on an issue. He has it all backward. People want the weapons they’ve always had – no more, no less.

With Biden’s new gun control legislation, he wants to take away the guns that people have always had the right to own, including AR-15s and other rifles.

Well, you couldn’t own a cannon.

Yes, we could have. And now, we can own an AR-15. It’s not Americans who are confused, it’s Biden.

Meanwhile, he’s basically issued a “come at me, bro” statement to the radicals so that they can get their hands on nukes and fighter jets.

He sounds paranoid. And, he’s essentially just threatened every American who simply wants to hold onto their constitutional rights. Yet, the liberals stand behind him because they’ve all been brainwashed to believe that the bumbling idiot is a good president.