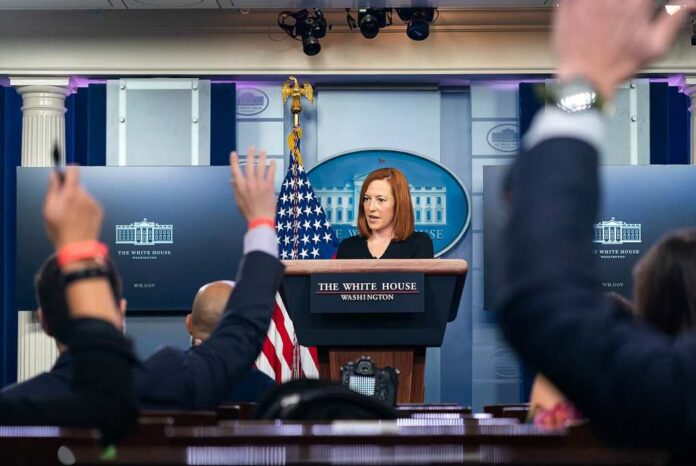 Ever since Joe Biden walked into the White House, the criminals of America have come out in force. The Democratic Party pushed the defund the police narrative so much that the liberal-run cities stripped funding from their police forces, and now they are paying the price for their ignorance.

The liberals are so full of pride they are ready to pop. In their minds, they can do nothing wrong. They have taken a familiar page out of their playbook and are trying to pin their ignorance on the Republican Party. They need to focus on their mistakes so they can start looking cool again to their voter base.

And yet, for the past year, the Democrats have pushed the idea. The defund the police movement started with the liberals, and it will be the end of the liberals. Their cities are in ruins, and the people are leaving at an incredible rate. No one wants to live in a high-crime area.

With everything that they have been lying about, there is no reason why they should stop. Jen Psaki is the White House Press Secretary. She has the job of perpetuating the lies that come out of the Oval Office. For example, she made mention that it is the Republicans that want to defund the police. She sounded just like Biden’s advisor Cedric Richmond who first vocalized the idea.

The Democrats push the blame-shifting because of the bill that the Republicans cannot sign onto. The American Rescue Plan was devised as the means to fix law enforcement and help those in need. But the bill is packed with progressive ideas and laws that will destroy America.

The liberals needed the conflicts of last year and the defund the police idea to push a bill through loaded with items that will hurt people. And now that the conservatives are not supporting the bill, the Democrats have found a place to blame for their failed attempts to rid America of law enforcement.

The Democrats made their bill out to be some savior for the country. But it was the devil in disguise. It may have provided a little relief for people struggling financially, but it would have stripped away their freedoms one by one.

Biden’s plan to fix the country was no longer needed since the economy was making a massive comeback. Instead, he wanted to spend another $1.9 trillion that America does not have in the bank. His bill would have pushed inflation up as it has already done over the past several months.

Biden needs to focus on getting lazy people back to work by not funding them to stay home.

One part of the bill that was not mentioned was it would have canceled debt for one state and city. Mitch McConnell noted that it would “wipe out the budget deficit of New York State, and eliminate a big part of the deficit in San Francisco.” Taxpayers would have paid for the spending of liberal leaders that do not know how to manage money.

And here, the liberals want to hide their selfish bill by telling everyone that the Republicans are bullies that do not want to fund the police. The Democrats were trying to secretly secure bankrupt areas of their control by funneling federal funds to the state level. Except they were caught in the act by the conservative party that works for and protects the people.

Kevin McCarthy stated that “So let’s be clear: This isn’t a rescue bill. It isn’t a relief bill. It’s a laundry list of leftwing priorities that predate the pandemic and do not meet the needs of American families.”

The nasty liberals are still defunding the police. They have put the idea in the shadows because they need to get the attention of the coming election year around the corner. They do not want people remembering that they were the ones calling for the destruction of the cities and the harm of the people.

Jenn Psaki may claim that the Democrats never called for defunding the police. But in the past week alone, there have been three significant liberals calling for the very thing Psaki is trying to pin on the Republicans.