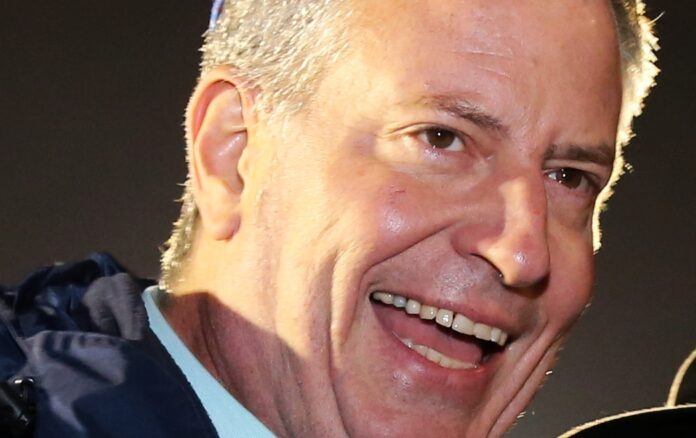 New York City mayor Bill De Blasio is trying desperately to revitalize a city plagued by the pandemic and a phenomenally high and rising crime rate. Tourism, a major artery of the cities lifeblood, is suffering from a severe blockage soon to become inoperable.

After this past year of horrendous happenings, De Blasio is pulling out all of the stops. He’s been hitting social media heavily with a series of promotional videos and pics depicting the cities vast entertainment empire and its tremendous amount of commerce opportunities. He’s been chumming in hopes of setting the hook.

But one of the pics slipped through his editing process and revealed something he would have rather preferred to not have been seen. It was taken at the reopening ceremony of a community pool in Brooklyn but what it revealed had very little to do with the glorious occasion. It had everything to do with him.

bill, why did you delete the first one? it was so pimp! pic.twitter.com/W73en62X7p

It was a bright sunny day in the Big Apple as De Blasio flashed his award-winning smile for the camera in his Hawaiin shirt, straw fedora, and John Lennon-ish round sunglasses. He was a cool cat in a cool city. But thanks to an observant viewer something else was discovered. De Blasio likes breasts. Big ones.

When the observer expanded the photo the reflection in De Blasio’s cooler than you shades showed the reason for his poop-eating grin. He was zeroed in on a large chested woman. They didn’t bounce their way past him without getting an eye full. No siree.

The internet is forever. De Blasio quickly removed the pic and replaced it with another one, but not before it was screenshot and passed around to thousands of other viewers who found it hilarious. To make things even funnier, the caption on the photo read, “The future of New York City is bright I gotta wear shades!”

One viewer wrote in response, “Bill. Why didn’t you leave the first the pic up? It was so pimp.” Being as how the guy lives in NYC and was at a pool in Brooklyn, his out-of-place luau-style outfit didn’t escape getting roasted either. He had a bad day all the way ’round.

Of course, someone had to break the humor of the moment by pointing out how Hawaiin shirts have become the unofficial symbol of white supremacy. There’s always one and this one was obviously a butt-hurt Democrat looking for any reason.

No. There has never been any indication of Mayor De Blasio being a white supremacist so please don’t go spreading that one around for God’s sake. An idiot? Yeah, we’ll run with that one seeing as how it’s already a widely known fact anyway. We’ll even toss in the word blundering.

The good Mayor is on the last leg of his journey anyhow. He already has a line of contenders larger than the circumference of Central Park hoping to knock him out of the saddle when the time comes. Democrat Eric Adams is likely the one who’ll succeed since NYC is loaded with liberals who are tired of hearing De Blasio bark without ever sinking his canines into anything substantial. Even so, Republican candidates need not apply.

Adams is an ex-NYPD officer who knows every street and area of town inside of out. He’s been in the trenches and witnessed some of the things the cities millions of residents have been complaining about to no avail. Granted, he’s still a Democrat, but after De Blasio, even a Libertarian would be an improvement.

No matter who defeats De Blasio, just like the view he was absorbed in, the changes would be big.